Trigger warning; a lot of provocative thoughts for Tolkien Literalists… (also the quotes I translate from cz version from my memory)

The royal Valar, as I call them, are of mystery, that goes far deeper once I began to wonder about them concerning practice of devotion and learnig about them from them… just as well as thinking about them in light of other traditions from the world, that are less… like chrystianity.

Just to make some obvious things set, Varda is wife of Manwe and she knew Melkor before the world began. Manwe is lord of the wind, the king of the Valar, with deep connection to Eru, Melkor rules frost, fire and darkness. Varda is queen of light and beauty, that reflects wisdom of Eru, probably. 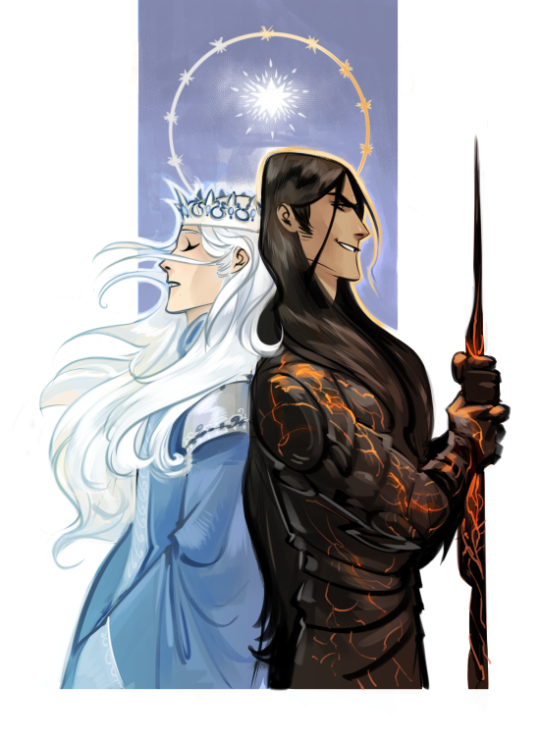 From the spirits I got the note, that Varda is lover of Melkor and it resonated true. It does makes sense, lord of darkness with lady of light, doesn’t it? You can see the stars only during the night, in realm of Melkor. It makes me think why being wife of Manwe, when she loves Melkor who she works and dances with? Possible answer might be that wile Mlekor is firely pleasure Varda enjoys as it fuels her light, Melkor is too chaotic for real engagement, simply said he was no wedding material. Manwe on the other hand could give her safety as he is calmer than his brother and more stable. Although it is highly unlikely that Melkor would ever harm Varda, as he indeed loves her, he would here and then tire of her and seek other interests.

Relationship between the brothers is fascinating. As brothers in soul they could also be twins. Wind and chaos, or wind and freedom are not that far from each other. They are very much like blood brothers Odin and Loki, but not the same. They too share many attributes, actually more than is obvious. (includes that who serves the one, serves the other as well, most likely) Who say Manwe is harmless, reread about eagle shaped winds above Númenor killing humans with lightening, which is power of Manwe. This was not done by Osse, as he doesn’t shape clouds. In fact storms are work of three elements; air, water and fire, together fused in lightening. Manwe works with Ulmo playing with water shaping clouds, but he also works with Melkor using lightening and setting fires, causing damage and even killing. Manwe probably prefers when Melkor goes with him as he follows Eru’s will way more and can guide Melkors powers more in line with the intentions of the One.

Being twin-soul with Melkor might go far deeper than between Odin and Loki, but in the end outcome is probably the same. Once one is killed the other one dies as well. Just like in Ragnarok, where Loki dies one death and Odin another one, seemingly unrelated, with Manwe and Melkor it probably goes that either the similarity between them suggest that they are in a way one, having but one life together (like Siamese souls with one heart) or it goes the way that killing Melkor removes the darkness and light without it goes out of all control and burns everything, till it evaporates into nothing.

Tolkien writes that before Melkor comes to destroy the world that even Valar will be jealous of the gift of humans. After some thinking it became obvious to me why they would come to such state of mind, which could also be described as wish to die. (suicide thoughts) Answer was actually written at the beginning of Hobbit. Hobbits live in the way of predictability. There are norms to keep and everyone who doesn’t fit into them slightly is weirdo, who doesn’t fit little more is social outcast. These norms are to be kept and the more you keep them, the more revered you are. Baggins were revered for being just as predictable. “You could say what Baggins will answer you even before you asked the question.” Also there is note that Bilbo says when he realizes that he speaks with Gandalf, the note that he caused many people to go on adventures and into danger and that life used to be far more interesting thanks to that. Once all dark lords are removed from the Middle-Earth, all unknown is starting to fade away and entire world is on the way to become like the Shire: predictable, known even before you start asking. By removing the unknown, or the chaos, that is Melkor, you get machine without any amazement, any surprise, any joy as that lasts only that long and then turns into boredom as life is change and change is gift of Melkor. (only such ideal beings that you can always perfectly know their answers before asking are brainless machines; that is actually scary thought)

Just to sort out some relationships between the three…

Air (oxygen) is esencial for fire, it would be extinguished without air

Fire/heat, and also cold, causes movements of the atmosphere, so it is essential for “birth” of wind

(these shows how Manwe and Melkor are connected through their “life,” one being heart of the other)

Quote: In the night that is darkest, the stars shine the brightest

(worth meditating and contemplating about, worth a lot of research and thinking)

Dance of light and darkness...

Light reveals the quality of air

Sun, the day star (fire of Melkor, light of Varda), causes the warming of Earth and moving of wind

In the end no matter which one of the three you pick, the one is balancer of other two:
Manwe: Balancing light of Varda and Darkness of Melkor
Melkor: Balancing Heavenly nature of Varda and Earthly of Manwe
Varda: Balancing chaos of Melkor and order of Manwe

When you take Tarot cards, you might get to the tale, that a Mage and Priestess are the parents of the Empress. It could also go for an Emperor. Still you get to the trinity, that is also deified in Christianity; father (god), mother (holy spirit), and son. Melkor as master of both fire and frost embodies the mage, Varda with her light and patience is priestess. Both are like extremes, being lord of darkness and lady of light, giving birth to the third being, the emperor in this case. Makes sense, considering that both darkness and light are heavenly aspects, while air is between heaven and earth. It also fits with ancient myths of creation, first is one, then two, they create third and then many are created.

And Manwe being third and representing balance, the mind that rules and freely moves between the extremes, was the fated emperor of all that was created further.

Tell me, how strange this got for you?

Tell you how strange this got ..

I dont understand any of it..the reason why it was written, nor where it was actually going, it was all too confusing..sorry..

That's fine, we two tend to not understand each other.

At least I got it out of my head... Perhaps it is good time for that, and for dropping the Valar temple webpage project. It isn't moving anywhere.

I just couldn't get my head around it all, it wasnt making any sense to me..it might to others though?

Maybe, maybe not, who knows...

"Yes, right. I agree. it doesn’t work because there’s this trip or trigger that kicks in, that’s why “mass consciousness” does not work and why individual healing does it seems. Look, Im not trying to be right, just to…"
1 hour ago

RichardtheRaelian left a comment for Brittainicus
""Happy Birthday!""
8 hours ago

"Be your own master. So true."
yesterday

"Good point,...they probably do IDK...I'm more likely to call it 'deceptive opposing consciousness' as their minds are in a way coming from a fractured consciousness ..as they have little regard for other humans & they…"
yesterday

"They must have same soul energy pattern."
yesterday

"They are trying to raise consciousness by getting people to understand we are all born of a singular consciousness. This whole subject is so interesting - how to raise mass consciousness while avoiding cults. I have not seen this but my personal…"
yesterday

"Hahahahha I get what your saying I saw the similarities you see,so your not actually far wrong..they could all be New Age cult leaders if you ask me too..there is something seriously wrong with all of them..brain washing people with made up…"
yesterday

"He kind of reminded me of the teacher from Heaven's gate, but on more closer look not so much..."
Friday

"Well Morrell for a man who claims to be a internationally recognized scholar in international politics, conflict resolution and U.S. foreign policy. he actually comes across as non of it and more like a brain washing kook,...hes totally trapped…"
Friday

"What does that even mean?"
Friday

"I agree, he's nothing compare to Linda."
Friday