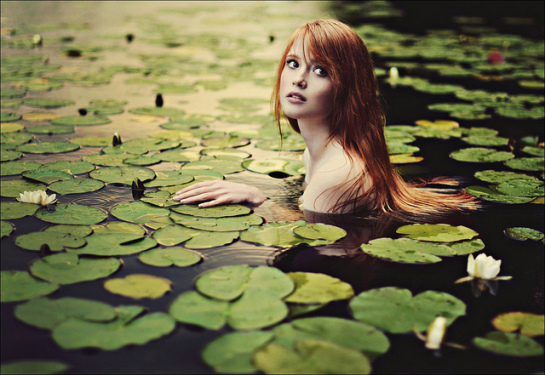 The Undines also live in the oceans and they look after the underwater plants and also the energy leylines.  Their job is to keep the energy lines free so mother earth can send her energy along them.  Water dragons also travel along these leylines and are affected when they become energetically choked also.  The Undines live also in fresh water and look like mermaids except they have legs instead of tails.

Undines are water elementals, and as such, spirits of the water world. We could say an Undine is a personification of water.

Their presence in the oceans was legendary among seafarers. Mostly beneficent, Oceanides would aid water-travelers in navigation and provide safe sea-ways.

I'm of a mind to say these beings intertwine their energy in mass to actually produce the element of water. Just as molecules cling and weave together to form bodies of mass - so too might the Undines unite their energies in a grand matrix that IS water.

This perspective put an actual face on water. Water ceased to be some object at my disposal. Rather, water became a community of personalities and intelligence to which my respect is due.

Reasons for My Incarnation

For the longest time, since coming into this body, I never knew my 'original' reason for incarnating in the first place, but after having a discussion with a friend - I think I now know.You see, I'm not really interested in sea life, because that…Continue

You need to be a member of Mermaids, Merfolk, Undines and Nymphs to add comments!

Comment by Treespar on May 21, 2018 at 2:37pm
I find Nymphs very interesting. What are some characteristics of Nymphs? Could I be one? I am not sure. I think they may be eather hormone drivin or something to do with energy They have a specific pattern since I am on Birth controll..

Interesting - I wonder if the migraine is/was associated with a powerful third eye opening.  I'm just saying because I have experienced headaches and even sensitivity to light with regards to my third eye getting stronger and opening more.

greetings I am a Nymph of Groves.   I found out more when I went to a place here in Oregon. at OSU (Oregon State University) The Campus had trees and I was just discovering my Nymph Origins. I felt the energy of the grove of trees and thats how i knew. The further away i got, i felt a big difference. When I got home, all of a sudden a migraine hit. I am not sure if its connected from being further away from groves ect but wow.. Or if its tied in with me being of elven lines as well. I am not sure. BUT here I am a mix of Elf and Nymph. as a Nymph i also have big leaf shaped wings that all of a sudden turned green after that energy exchange..

Morell Sunweaver left a comment for Woke
"Welcome among the elves."
6 hours ago

Steven Hutchinson left a comment for Woke
"I am delighted to welcome you to Elven World. Infinite Blessings with the Highest Divine Energies of God's Love, Light, & Abundance that are Divinely Perfect for you this year, Steve"
6 hours ago

Woke is now a member of Elven World: Return of The Tuatha de Danann
7 hours ago
Welcome Them!

Morell Sunweaver replied to chris smith's discussion elves in hanova.
"Are you from Hanova, Chris?"
yesterday

Thomas Dale left a comment for Steven Hutchinson
"Thank you so much for the welcome. It is much appreciated. Blessings to you. I feel quite new still to things and am still exploring quite what it means to me. I think I will fit in here. Thank you and many blessings to you."
Feb 16

Thomas Dale left a comment for T.E. Pelton
"Thank you very much for the welcome. I'm looking forward to exploring the site and meeting new people. I enjoy the High Elven Wisdom and Love's channel a lot. I've not commented there much, but have watched a lot. I hope to build my…"
Feb 16

Thomas Dale left a comment for Morell Sunweaver
"Many thanks for the welcome. It was very nice of you."
Feb 16

Steven Hutchinson left a comment for Thomas Dale
"I am delighted to welcome you to Elven World. Infinite Blessings with the Highest Divine Energies of God's Love, Light, & Abundance that are Divinely Perfect for you this year, Steve"
Feb 16