Step into Claudia Bueno’s aquarium-style installation at Meow Wolf’s new space in Las Vegas and experience the slow, oscillating movements of natural life. “Pulse” is comprised of countless white line drawings that are meticulously intertwined and superimposed on 60 glass panels. When illuminated, they mimic scores of nautilus spirals, coral, vines, and botanics that sway and throb in glowing masses.

“This is what ‘Pulse’ is, a way of creating animated volumes using layers of drawings that build up. I have been refining this technique for the last six years, understanding how these forms can also have a moving quality when the light system is applied,” the Venezuela-born artist says, noting that the idea for the project grew out of a visit to Yellowstone National Park.

During the course of eight months, a team of women painstakingly painted the glass panels at Bueno’s Idaho studio. “The repetitive/meditative quality of the work lent itself to provide a very special healing space for us as we drew fine lines for hours and openly shared and supported each other,” she says. No matter the scale of the project, Bueno begins with a single dot that she duplicates, expands into lines, and eventually into intricately developed patterns, which she explains: It seems like it doesn’t matter what size, materials, and tools I am working with, the same kinds of patterns manage to manifest themselves over and over, building on each other, gaining both complexity and simplicity at the same time… It has been an interesting brain challenge to visualize a stack of 2D drawings that then become 3D and move. It’s my own version of a non-digital, hand-drawn time-lapse or animation.

Although much of the installation’s work is complete, Bueno shares that she’s creating smaller sculptures, jewelry, and other works to coincide with the larger project. “Pulse” is set to premiere at Meow Wolf’s satirical sendup of consumerism, Omega Mart, which the Santa Fe-based arts group (previously) will soon open within Area 15 in Las Vegas. Until then, watch the video above by Adolfo Bueno and find more of Bueno’s light-based works on her site and Instagram. Video by Adolfo Bueno. First Look at ‘Numina’: A Wonderland Brimming with Bizarre Creatures and Fantastical Scenes Opens at ‘Convergence Station’ in Denver..

Between a two-story metallic spaceship, gnarled trees teeming with strangely colored mosses and lichen, and fantastical creatures, the eccentric artworks that comprise the new space at Convergence Station by Meow Wolf (previously) rival those in even the most peculiar sci-fi universe. The immersive, swamp-like installation, which is dubbed “Numina” or the spirit of a place, is one of the anchors of the Santa Fe-based company’s latest undertaking, which showcases more than 70 installations by 300 artists across four floors. Four years in the making, Convergence Station opens on September 17 in Denver.

Accessible through a series of secret portals and wormholes, “Numina” scales 35 feet into the air and is designed as a multi-sensory experience inviting visitors to interact with their unearthly surroundings. When someone speaks to one of the four glowing creatures resembling sea urchins, for example, the forms warp and spew the echoed audio across the space. The color-changing “Fairie Orbs” similarly sing and vibrate with intonations when a person passes by, and the “Frog Egg Garden” emits kaleidoscopic lights and quiet sounds when activated with touch. Spanning three levels, the extraordinary, hand-built project is evidence of the team’s penchant for detail and ability to fuse seemingly disparate reference materials into surreal sculptures with various colors, textures, and shapes. The wood-like structural elements, for example, are wrapped in innumerable folds that artists modeled after the wrinkled skin of hairless cats, while pieces like the “Toad Piggies” are hybrid creations and the “Nudibranches” exaggerate the striking bodies of real-life mollusks by stretching them to seven feet. “Some ‘flowers’ were inspired by jellyfish, and some ‘jellyfish’ look more like flowers,” says Caity Kennedy, the project’s creative director and co-founder of Meow Wolf. Although individual artists retained control over much of what they created—the expansiveness of this collaborative approach is part of what makes “Numina” so uniquely vast and diverse—Kennedy tells Colossal that she gravitated toward the more bizarre works rather than whimsical, fairytale-style pieces. “It is an interesting challenge to play with the balance of comfort and discomfort, to build a space that is welcoming but sometimes unnerving, to make people feel both safe and adventurous at the same time,” she shares. “There are so many things I could point out… Look for the sundial! Find the zoetrope! Point the sort of mollusk orchid/telescope creatures at the stars! Find Leomie’s Field Notebook in the library!” Stunning, I love this, how inspiring. Fractals, sacred geometry expressions of energy flow…i

Oh I do it without thinking too. like I'm looking at the ant on the ground,I'm seeing it in colour n all to start with in its natural form crawling around, and then next thing I know I can zoom in on it close up as if I have a microscope on top of it, that's the only way I can describe it, it wasn't until I got older I realised I was doing it even, as I just thought everyone else did this,but on talking to my Nanny about it she said she couldnt do that & then telling my Dr about it later, he said nope I cant do that either...nor can anyone else ..so explain to me how you do it, I was like no I cant as I dont know how I do it.. it just happens automatically or unconsciously cos I'm not thinking on doing it with conscious intent & only when looking at tiny insect's or bugs, cos I cant do it on looking at anything else no matter how much I try..

No I see them shades of grey, just like that image below,as if they are under a microscope, and I can zoom in on them like a camera zoom lens.. that's why its so weird..I mean really weird aye..

Do you see them in shades of grey or colored?

Neither do I know,but it is a cool gift if you want to look at ants & insects that is..

Could be an ability you kept with you from previous lifetime. But I do not know.

Yes I think that's what it is too..and I taught myself from a child how to do it without knowing how I actually did it,so I cant pass on the steps to others,so its termed as a gift when I explain it ..how else cos its not a medical working of thing in all humans..could also be a formatted symptom of Synesthesia which I have too..

Always good to have good eyes. I suffer short-sight issue, (myopia) which is quite common thing unfortunately. It is little funny that it works for you only with insects. Perhaps it truly means that you use your true-sight, or third eye, whatever is the correct word.

Yup shes tapped into it,now its part of her internally via her minds third eye..like looking at things under a microscope but bringing them back into realistic visual size. I can do this with ants & small insects only, I cant really explain how I can change my visuals to a microscope when I look at them though it just happens instantly,my Dr says my vision is perfect,and that he thinks its an ability that I learnt or taught myself as a child, so its part of my brain function that tells my eyes to focus in more than other peoples can,he cant explain it either really he said its unique.... but I think its actually via my third eye that I'm seeing them & not my own eyes if that makes sense to you...but I see ants & insects like they are under a electronic microscope only nothing else..they look like this image below.. 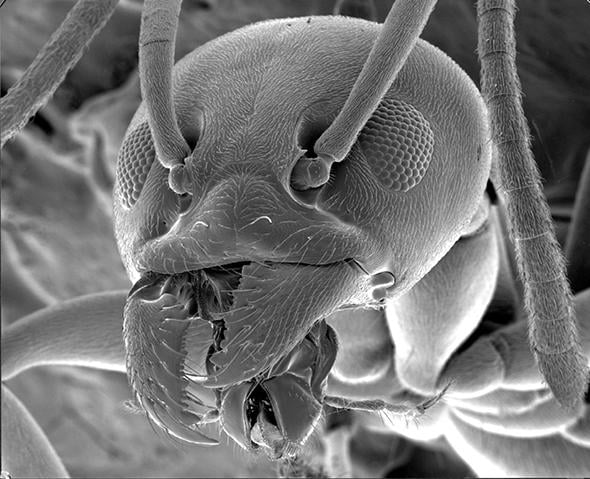 I can see some of it.

Tara Pelton Popular commented on Morell Sunweaver's group Art valley
"Wow. You are creating and I am so here for it"
11 hours ago

Ꮙℓἇ∂ἇ ኔጡ። left a comment for Tara Pelton Popular
"Thank-you for your kind words on my profile page, I'd say if Raven had anything to do with things there certainly will be a message in there somewhere personally for you, it was either a message from beyond and or also to simply reassure you…"
Jan 13

Tara Pelton Popular commented on Morell Sunweaver's group If something exists, there is fun of it
"LOL"
Jan 12

Tara Pelton Popular left a comment for Ari (Awkwardly Zen)
"Welcome! We love to have you here so much. For those who don’t know Awkwardly Zen is a group in meetup.com and based in USA with USA  time zones though some are at times international folk can make. Folks are awesome and zoom meets are…"
Jan 12