A search on this forum yielded no results, so I've taken it upon myself to type something up on this topic.

Why build one: cloudbusters are supposed to repel chemtrails as well as regulate the weather. rain will be more likely to fall in drier areas and wetter areas will become drier. from what Ive read, it is weather stabilization. having a cloudbuster also aids in plant growth, as all life benefits from the scalar waves generated by the device.
one can purchase a cloudbuster, but expect to pay 500 USD or more plus shipping on ebay for a unit which may or not be skimping on crystals or metal.

others on the web have argued that making several single pipe cloudbusters are advantageous in casting a wider spread of scalar energy instead of one single unit.

How to build: I've gone over most of the internet researching this. all cloudbuster information is derived from don crofts model, which is a modified Wilhelm Reich design.

I've found this clip to be best, but with reservations I will describe below:

The wood plate on the bottom help. I didnt have the wood available, so I placed them in position and poured a layer to keep them in place while aligning the pipes with a level. I used duct tape on top in a
"red hot chili pepper" design (like a big asterisk) to keep them aligned. slight variances can be corrected through gentle bending of the pipe, and the pipes do not need to be 100% perfectly straight for it to work.

Silicone is not the best. gluing the stones directly to the endcap worked best. I used "household goop" to stick them down after having the silicone fail to set properly. the little piece of hose is not needed.
I've seen other people cast the crystals into an epoxy 'bullet' and then simply slide them down the tube when it was complete.

Copper pipe is not very cheap. steel pipe can be used in lieu of copper, but copper is best. copper pipe, couplings, and the end caps can be found in the states at lowes and home depot.
crystals, double terminated, are only found online. ebay was the best source. amazon sellers wanted big money (18 USD/ea.) i found them far cheaper on ebay. watch for plastic crystals from chinese sellers. one other thing to be careful is that the crystal diameter may not fit 100% in the copper pipe, so be selective. if you end up buying one that does not fit, just add it to the matrix. it will still help.
Keep in mind that quartz crystals are readily available in local landscaping rocks. its possible to take them and chip them into double terminated crystals, but some sites indicate that you should let your intention be known so that the stone knows what you are doing. this may sound silly, but if crystals have an ability to record or store energy, there is basis for this. the more crystals, the more power.

on mine, I added 1.5 pounds of selenite and about a half pound of kyanite. you should add those to your matrix, as they supposedly recharge or re-energize the quartz.

I researched many hours on the metal differences. in short, aluminum shavings are best in terms of price and function. i got 5 pounds for 20 bucks on ebay. you can hit a local junkyard and ask-- oftentimes, they will have some shredded aluminum there, costing you about 50 cents/lb.

this is from warrior matrix` thorough website:http://www.warriormatrix.com/viewtopic.php?t=7395. 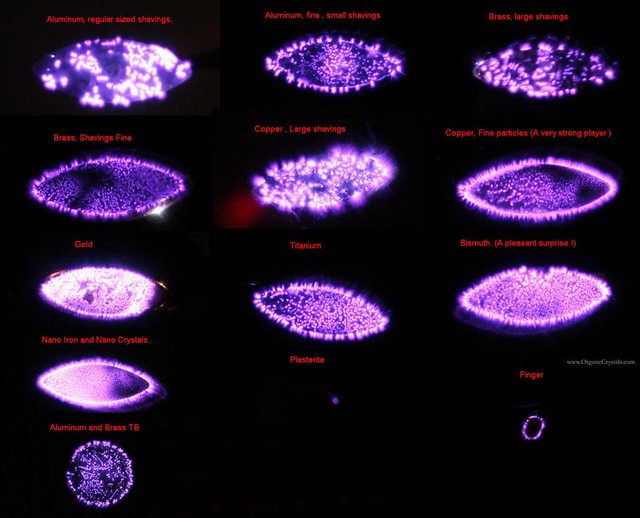 Based on these findings, stick with small aluminum shavings. you'll be hard pressed to find bismuth, copper isnt cheap, and gold is cost prohibitive. you can find brass shavings/turnings at a junkyard, but they will be about 1.60/ lb., and from the photos, look to be inferior to aluminum.
black iron oxide is very popular on youtube. some call it 'black sun orgonite'.

I added azomite powder for an added ORMUS layer. it should theoretically help.

I saw that some people were wrapping their crystals with copper wire. you can do this, but according to the website above, dont worry about the clockwise/counterclockwise handedness.

The epoxy resin was bought on amazon. I got two gallons of the mix (1 gal hardener and 1 gal resin) to be added to a 3 gallon bucket. with the aluminum shavings, this worked well. if you are burying the device into the ground, you dont need the clear, as the clear epoxy usually runs a little more in price.
I am in the middle of the 3rd pour of 4. its feasible to pour the whole thing in one shot, but I was concerned about the plastic bucket being #5 polypropylene reacting to the resin and the resin melting the plastic. with successive pours, the generated heat was not much of a concern.
if you simply follow the epoxy directions closely, there will be no problems with tackiness or improper curing. pour equal parts, mix well without stirring in air bubbles, and dont scrape the sides of the mixed container.

Some people have put dried herbs into the resin. I personally do not think its a good idea.

There are sites that concern themselves with the positive and negative ends of the crystals. I found on other sites that that did not matter. all sites agreed that one should keep positive thoughts and intention in their minds when constructing cloudbusters in order to confer these ethereal energies to the crystals and to the device.
lastly, the device needs a week or so to work up a charge. one is supposed to leave the device out in the sun to charge it.

If you are simply making an orgonite device or a towerbuster, then youll need to layer the pours, having alternating crystal and metal layers. the more layers, the better. mixing the whole mess together will never work. layering are absolutely essential.

You can read heaps more from the source link below:-

Video on one huge one made and he was effective in making rain..but he over dosed on orgone energy apparently.

I'll have to think about where to get aluminium shavings.

Your likely to find it at a Engineering/fabrication workshop should have some as they drill into aluminium sheeting all the time.