TIR NAN OG (THE LAND OF THE YOUNG) 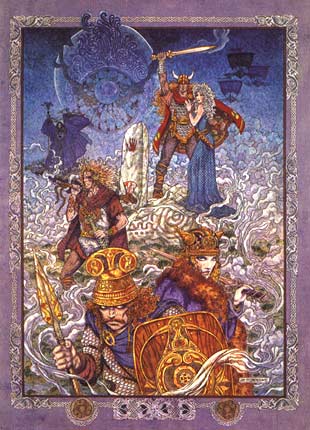 TIR NAN OG (THE LAND OF THE YOUNG)

Tir Nan Og is the land to which the Irish faeries know as Tuatha de Danann (Too-ah day Thay-nan, or Tootha day danan) fled when their lands were taken by the Milesians. In Tir Nan Og they spend their days feasting, gaming, love-making and partaking of beautiful music. The faeries can even enjoy the thrill of battle, for anyone slain is resurrected the following day. It is the paradise that mortals can only dream of.

Faeries, also known as the little people, green men, good folk, fayerye, fairye, fayre, faery, fairy, fatae (Latin), fee (French) and fay (Anglican), are one of the most popularized fanciful races in mythology and literature. They are featured in myths from the early Norse-men, Celts, Romans as well as in Medieval French, English, Irish and Scottish tales. In literature faeries have been written about by Chaucer and Shakespeare and many others. But what are faeries, and do they have fairy tales? This article attempts to unlock just a few of the mysteries surrounding the little folk.

The Tuatha Dé Danann (which means the people of Danu) arrived in Ireland bearing with them their stone of destiny called the Lia Fail which they placed on the mound of Tara and ever after the rightful kings of Ireland were chosen when it called out. They also brought the spear of Lugh which ensured victory to whoever wielded it, The Sword of Nuada from whom none could escape and the Cauldron of the Dagda from which none would go unsatisfied.

There is a story that they came to Ireland in flying ships but could not land as the Fomorians had set up a great energy field that they could not penetrate. So they had to circle Ireland nine times before finding a breach in the energy field and setting down on Sliabh an Iarainn (The Iron Mountains) in Co. Leitrim.

They clashed with the Fir Bolg (the men of the bags or pot-bellied ones) who they defeated at the first battle of Magh Tuiredh (Moytura) and routed towards the West of Ireland where they allowed them to stay. After defeating the Fir-Bolg they were challenged by the Fomorians and had to fight another battle this time in Co. Roscommon, which became known as the second battle of Magh Tuiredh, they defeated the great Fomorian warrior Balor, and so laid undisputed claim to the land.

They prospered under their two great heroes Nuada of the Silver Arm and Lugh of the Long Arm. They were eventually defeated by the Milesians at Teltown. As they were a magical people they decided to go underground into another dimension of space and time the entrances to which are at many sites around Ireland; one of the most famous being Brugh na Boinne (Newgrange).

It was reputed that only iron weapons could injure them. They became like gods to the later Celtic people and were worshipped as such.They became known as the people of the Sidhe (mounds) and there are many Faery Mounds in existence in Ireland today. 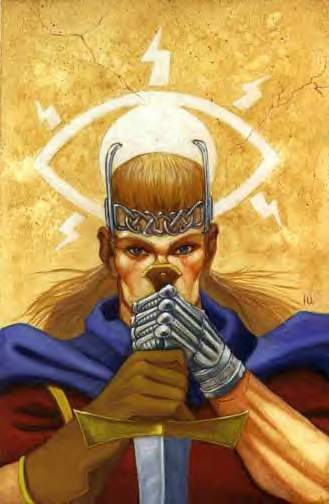 There are many different faerie organizations. Each has its own hierarchy and local legends. In Scotland there is the Sellie Court, a group of rather beneficial spirits, who may none-the-less play the occasional trick on a mortal. The Selie Court are some of the more aristocratic faeries, and are known as tropping, or heroic faeries. The dark Unsellie Court deserves special mention, and a serious warning. 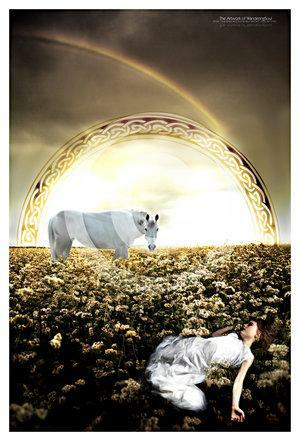 The great Tuatha de Danann of Ireland fled to Tir Nan Og after their defeat by the Milesians, however those who remained in Ireland became the Daoine Sidhe. Side (Shee) is Gaelic for 'people of the hills'. Originally it referred to the mounds in which faeries lived, though it has now come to refer to the inhabitants as well. With the introduction of Christianity to Ireland, the Daoine Sidhe diminished in importance, and also shrank in size, from the gigantic Tuatha de Danann to that of more traditionally sized faeries. Their king is Finvarra, who like all of his clan is a skilled warrior. He is also fond of chess playing and womanizing. Despite the fact that his wife, Donagh, is one of the most beautiful women above or below the ground, he is known to abduct brides-to-be. Like the Seelie Court, the Daoine Sidhe, enjoy riding and are famous for their faerie steeds, which can carry a rider faster than the wind over land or water.

Another group of faeries in Ireland inhabit the Lough Lean. Their ruler is O'Donoghue who rides forth from the lake every May Day on a war steed to ride into the surrounding mist.

Wales has perhaps more clans of faeries than any other area. In Glastonburry Tor, famous from Arthurian legends, Gwyn ap Nudd rules over the Plant Annwn (roughly- family of hades). Whoever eats of their food is doomed to remain forever. The Welsh Gwyllion, mountain faeries, have a disturbing habit of sitting on rocks on either side of a path and staring silently at passers by. The Tylwyth Teg (Terlooeth teig) can only be seen by mortals who first rub their eyes with a special faerie ointment, so strong is their glamor.

However the most famous Welsh faeries are the Gwrgedd Annwn (Gwrageh anoon), the water faeries who are though to live in a submerged town beneath a lake. They are occasionally known to take human husbands, but if the mortal should strike his wife, then she will leave him, never to return. Long ago, on every New Year's Day, a door would appear in the side of a great rock next to a certain lake. Those who entered found that it lead to a passage that ended on the island in the middle of the lake. This island was a beautiful garden kept by the Gwrgedd Annwn, who would serve wonderful food to the travelers and treat them as honored guests. They warned the fortunate mortals that the doorway was a secret and that nothing could be taken from the garden. One mortal took a single flower from the garden and as soon as he touched the soil of earth, all of the other other travelers were expelled and the doorway was closed, never to reopen again. 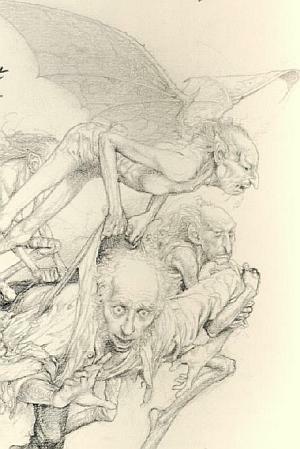 The Cornish small people are reduced in size every time they use their shape-changing abilities. They grow smaller and smaller, finally ending their days as ants. For obvious reasons, it is considered in Cornwall unlucky to kill ants.

In the Orkneys, the sea faeries are known as Selkies, who appear seal-like. The females will often shed their seal skins and walk upon the shore as beautiful damsels. If a man should take the seal-skin, he can force the Selkie to become his wife. If she should ever find her skin however, she will leave with it never to return.

The Scottish Unsellie Court contains the most malicious, malevolent and evil of the faeries, and a number of monsters of horrible appearance and fearsome abilities as well. It is one of the only groups of faeries which is known for being thoroughly evil without exception. Every night around twilight, a group know as 'The Host' emerge and carry off any mortals which they find. The unfortunates who are brought back to their realm are rarely heard from again.

Arethinn aTinderel commented on Arethinn aTinderel's blog post Announcing Shining Hearth!
"Staff signups for Shining Hearth will close tomorrow, December 2. If you have been thinking about helping out as a mod or assistant but not signed up yet, the form is still open. As always, we encourage subscribing to the newsletter. (We…"
yesterday

You Are A Beacon Of Light ! So Shine, Beacon, Shine !

YOU ARE A BEACON OF LIGHT!SO SHINE, BEACON, SHINE! “Let your chest expand, let it expand right along with your heart,” the…See More
yesterday
0 Comments 0 Likes

Tara Pelton replied to Tara Pelton's discussion My mother is passing
"This is so beautiful, perfect, thank you, a true friend to me."
Nov 26

Ꮙℓἇ∂ἇ ኔጡ። replied to Tara Pelton's discussion My mother is passing
"As a chance to rise & embrace the gift of life ...Stand in awe of the promise that transcends the frailty of time.....This is the time for change,remember all that remains is to move beyond the self-absorbed,the allure of self-reliance and…"
Nov 25

Morell Sunweaver replied to Tara Pelton's discussion My mother is passing
"Lucky her... But litting a candle is good in almost any tradition I believe."
Nov 25

My mother is passing. She is shaman, musician, black Irish. In the world of her recent life, most of this is unknown to her friends and family except me. I would like to honor her in Celtic tradition. Could you please post any advice. Love to all.See More
Nov 25
4 Comments 0 Likes

Solar Rays Of The Beginning By Natalie Glasson &Helios & VestaGreetings, we are Helios and Vesta. We are one soul and yet we express ourselves as a masculine energy and a feminine energy. We are the overseers of the Solar Level of the…See More
Nov 25
0 Comments 0 Likes

Morell Sunweaver commented on Carl Gustaf Prien's group The Crystal Cave
"https://twitter.com/i/status/1330191662518312962 Mysterious monolith found in the desert. What is the secret of this stone, if it is stone? :D"
Nov 24

Morell Sunweaver commented on Tanner's blog post Starseeds.net is back
"Then it is good news, you are learning."
Nov 24

Kaldara commented on Tanner's blog post Starseeds.net is back
"I had to stop myself from unintentionally choking someone with telekinesis that was in the building next to me.  When I sensed what I was actually doing, I made myself stop in time.  All this from imagining I was choking someone else and…"
Nov 23