The Elves Are Returning! 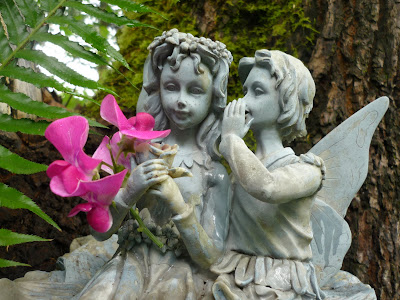 Comment by Nevin on March 21, 2011 at 1:10pm
I love that term "Returning Host", John-Paul.   For they return in their Merkaba's or light bodies~ chariots of the soul.   Just like a Heavenly Host.     I love that name Eilir, it shares many of the same sound pieces as Alberich's hidden name, as does Aeon ~Alberich's hidden name is:  Ealimon High King of the Elves.     Connecting the mind with the heart can ignite great beams of light appearing to come from the head.   This, in fact, is Drunvalo's Melchizek's latest and current meditation practice and teaching.  You've shared a powerful, and truthful vision!   I'm looking forward to hearing more of what you and Eilir have to say.

Comment by John-Paul Riley on March 21, 2011 at 12:43pm
I'd enjoy a very long real-time conversation with you, Ted.  The Fey who delivered his formal message is coming closer into contact with me.  His name is Eilir, and he is in training to be a Shining Fey, those Fey who are so steeped in wisdom, experience, and love that they shine with the glory of divine light and ripple as a flowing stream amongst the currents of divine shadow.   His title is the Herald of the Returning Host, whose job it is to speak for the Queen of the Returning Host, who flashes beams of loving-wisdom from her crown as proof of Aeon's blessing.  Eilir is asking me to create space in my life to work with others to collect, record, and breathe life into all that he and others wish to say.

The Koheal Project with Justin..

The Koheal Project with Justin..New Zealand stylz...lol..Waiheke Mystery School - The Seed - KohaelPlease donate to Justins wonderful project at link below:-https://kohael.com/Welcome to my first clip, thank you so much for watching ;D It is a great opportunity for you to meet my instruments and my vibe ! This video is here to plant my intentions. What do I want to provide through my music and this project? A grounded, anchoring…See More
7 hours ago
0 Comments 1 Like

RichardtheRaelian left a comment for Fi S. J. Brown
"Hi! It would be nice to see a smile on your face."
23 hours ago

Christine Day's Pleiiadian Messages & Broadcast For October & November 2022Pleiadian Message For OctoberBeloved ones we greet you, Your Earth is shifting, like the sands in a desert. Be willing to allow the changes within your own consciousness as a complete metamorphosis begins to take place within you. Know that the time has arrived for these vast changes to…See More
yesterday
0 Comments 0 Likes

I Choose to Live in Love (Lakshmi)

We spend our free time with many and nearly infinite ways, some creative, some exciting, some just peaceful and resting. And we are also having fun, right? Lets discuss how we spend our free time.Present here your favorite activities, not only art, but events, books you read, music you listen to or play, arts you do, places you visit, etc. Share anything you do and feel like sharing it.…See More
Monday
20 Comments 2 Likes

"The indians had other downsides."
Sunday

Its as good a place as any to meditate

"At his place I would fear for finding my shoes and walet when I open my eyes. but if that was me, people would ask me to put shoes back on as my socks always turn stinky. :D"
Sunday

Its as good a place as any to meditate

Amazon fires: the tribes fighting to save their dying rainforest

"So much o the insanity would end if people weren’t grasping for money and position and things….."
Nov 22