Very late Lammas/Lughnasadh blessings to all here at Elven World!

I have been so busy this last week and only just had the chance to drop by and wish everyone Lammas love and blessings, so I hope you all enjoy the following.......

In many cultures, there are different legends and lore surrounding Lammas (Lughnasadh). Here are a few of the stories about this magical harvest celebration from around the world.

In Israel, the festival of Shavout commemorates the beginning of the harvest, as well as honoring the date that Moses received the Torah on Mt. Sinai. The final sheaf of wheat is brought to the rabbi for a blessing, synagogues and homes are decorated with flower, and a great feast is prepared for all to enjoy.

The festival of Onam is celebrated in India, and people dress up in their finest clothes and give food to the poor. Onam is celebrated in honor of King Mahabali, who was a ruler of Kerala. In one story, the god Vishnu approached Mahabali dressed as a beggar, and asked for land, which Mahabali gave him. Mahabli ended up buried under the earth by Vishnu, but was allowed to return once a year, symbolizing the planting of the seed and the subsequent harvest.

Thor’s wife, Sif, had beautiful golden hair, until Loki the prankster cut it off. Thor was so upset he wanted to kill Loki, but some dwarves spun new hair for Sif, which grew magically as soon as it touched her head. The hair of Sif is associated with the harvest, and the golden grain that grows every year.

In the Shetland Islands, farmers believed that grain harvesting should only take place during a waning moon. They also believed this about the fall potato crop, and the cutting of peat.

At Lughnasadh, calves are weaned, and the first fruits are ripe, such as apples and grapes. In some Irish counties, it was believed farmers had to wait until Lughnasadh to start picking these fruits, or bad luck would befall the community.

In some countries, Lammas is a time for warrior games and mock battles. This may hearken back to the days when a harvest festival was held, and people would come from miles around to get together. What better way for young men to show off their strength and impress the girls than by whacking away at all the competition? Games and contests are also held in honor of Lugh, the mighty Celtic craftsman god, in which artisans offer up their finest work.

It’s become a custom to give people the gift of a pair of gloves at Lammastide. In part, it’s because winter is just around the corner, but it’s also related to an old tradition in which landowners gave their tenants a pair of gloves after the harvest. The glove is a symbol of authority and benevolence.

Lammas is the first of three Pagan harvest festivals, and takes place on August 1, right around the time of the early grain harvests. 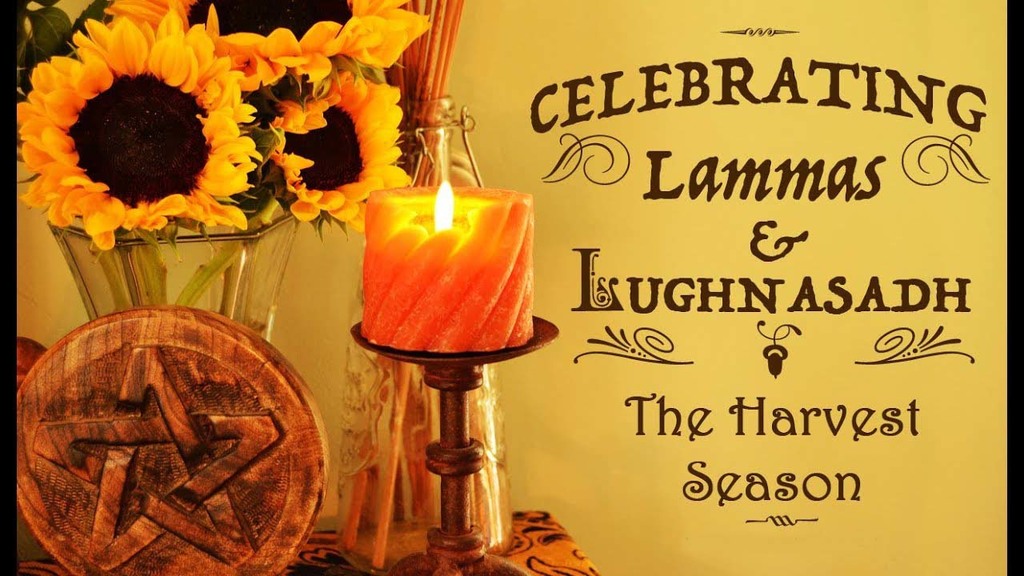 It’s the dog days of summer, the gardens are full of goodies, the fields are full of grain, and the harvest is approaching. Take a moment to relax in the heat, and reflect on the upcoming abundance of the fall months. At Lammas, also called Lughnasadh, it’s time to begin reaping what we have sown throughout the past few months, and recognize that the bright summer days will soon come to an end.

Lammas is normally celebrated on August 1st in the Northern Hemisphere and is one of the eight Sabbats celebrated by Wiccans, Pagans and Druids.

Also known as Lughnassadh, Lammas is commemorated and celebrated as a time of abundance, prosperity and success. It is believed that during the period of Lughnassadh it is possible to make manifest immense positive changes in health, wealth and happiness.

Casting Spells during Lammas for drawing healing, abundance, prosperity and material wealth are said to be most successful.

Lammas is also considered to be the perfect time for lovers to commit to one another. Handfasting Ceremonies are always popular at Lammas. Handfasting is where couples are gently bound by a cord around their wrists which is then knotted to symbolise their commitment to each other. The lovers commit themselves to each other for “a year and a day,” “a lifetime,” “for all of eternity” or “for as long as love shall last,” by ritually “tying the knot.”

With love in the air around Lammas day any Love Spells that are cast on and around this day are said to manifest swiftly and successfully.

Hello and is good to see you back.

Is it already after midsummer? Oh, wait. It is. I don't pay much attention, I see the cycles of life, but don't bother about points on them.

Still I hope you did enjoy it.

Permalink Reply by MysticPagan*Toni* on August 7, 2018 at 1:52pm
Yes Lammas is the first harvest festival, the second being Mabon which is also the Autumn Equinox!

Permalink Reply by MysticPagan*Toni* on August 7, 2018 at 1:54pm
Mabon is celebrated around 21st September!

Blessed Lughnasadh/Lammas. Or as it is said in my tradition "Jullee Hearthfest."  I do not celebrate the holiday as most pagans and wiccans do, though there are some basic similarities. But that's neither here nor there. Be safe, be happy and be kind. That's what matters.

Permalink Reply by MysticPagan*Toni* on August 8, 2018 at 10:25am
Is that anything to do with the Hearthfest festival celebrated in Gateway Park at Cedar Falls in Iowa!

Well I am in Missouri, so whatever they celebrate in Iowa, I have no idea. The name Hearthfest came to me in deep ponderance with the gods, as a name for the August 1st-2nd two day holy festival. My holiday is very much attached to everything around the hearth, specially (but not limited to) bread making. A time to clean the ovens in prep for all the cooking to come for up coming seasons.

Permalink Reply by MysticPagan*Toni* on August 8, 2018 at 2:14pm
It's a splendid name for a splendid time of year, stay blessed!

And you as well. I find the glory and majesty of all the holidays I celebrate: Their quiet times, their loud times, decorations, games, music and foods. Of course for me Autumn is the big ones, as I was born 5 minutes before September 21. And Halloween. Pfffft, whats not to like? LOL. And Evetyd, which is sort semi sort like Thanksgiving. Sorta.

You fall asleep on Earth and you wake up on another one.
yesterday
0 Comments 0 Likes