The Freeing of the Fey


The Freeing of The Fey

Through thunder strike and lighting flash,
The Earth is shaking as Nations clash

For the Titan Aeon at the heart of lands
he smiles gently, and shifts his stance

The world, she trembles thrown askance
The clouds, they darken as the lightings dance

The Fey as one, they raise their voice
The time has come, their hands they hoist

The ripple from the shifting stance
arrives at last, to Faerie lands

Loving-wisdom find your way,
streaming forth from charging Fey

Spread Wild wisdom through the lands,
For in our wake, the Wild stands

We come to stir, we come to kindle
With the lightings wild spindle

If you would surf the surging wave,
As worlds shake and nations cave

Then stand ye forth to accept the Three,
the sacred tasks we charge to thee

First, Seek within your heart and mind
the love which fires your humankind

Second, Love to the ones who serve their fear
For beyond their rage lies your sacred tear

Third, heart to heart and hand to hand
Walk forward together into the reborn land

A little backstory on this message from Faery,
I was driving into work the morning of March 15th, 2011, when I suddenly had to pull off to the side of the road. I began to tremble, and fell into an ecstasy. Words and song, and tremendous amounts of energy began flowing through me. I felt an explosion of wild, fierce, loving joy that rocked me on my heels, the sense of a mighty shift, the sense of a fierce love straining, restricted, unable to give voice fully, held back and pent-up for so long... suddenly free! The entire experience left me breathless.

When I had time, I entered meditation and tried to work with this experience. Out of the meditation, the song poured forth, and along wth it the deep sense of wanting shared.

I have no idea what it "really" means.
I know only that what moved through me was so powerfully authentic that my soul rang like a bell.

These experiences are always seen through a particular lens and require great caution when trying to interpret, but if I were pressed to provide some explanation, I might say that the energies of that Otherworld Realm we call "Faery" are going to be very active upon the Earth in the years to come.

I will be honest, the song gets my blood boiling and my heart racing, and I can only weep with joy and feel deeply, powerful, at long last... at long last, the Old Magic is returning.

Comment by Arethinn aTinderel on May 11, 2011 at 1:49pm
This was really cool. I'm going to add it to my Faery Miscellany (an offline private print collection I keep).

Yes, John-Paul, I'm with you 100%!   Its so wonderful to hear such an articulate, thoughtful and hear warming soul quickening description of the times.   The Elven Gates are opening once again and our Anam Chara return. 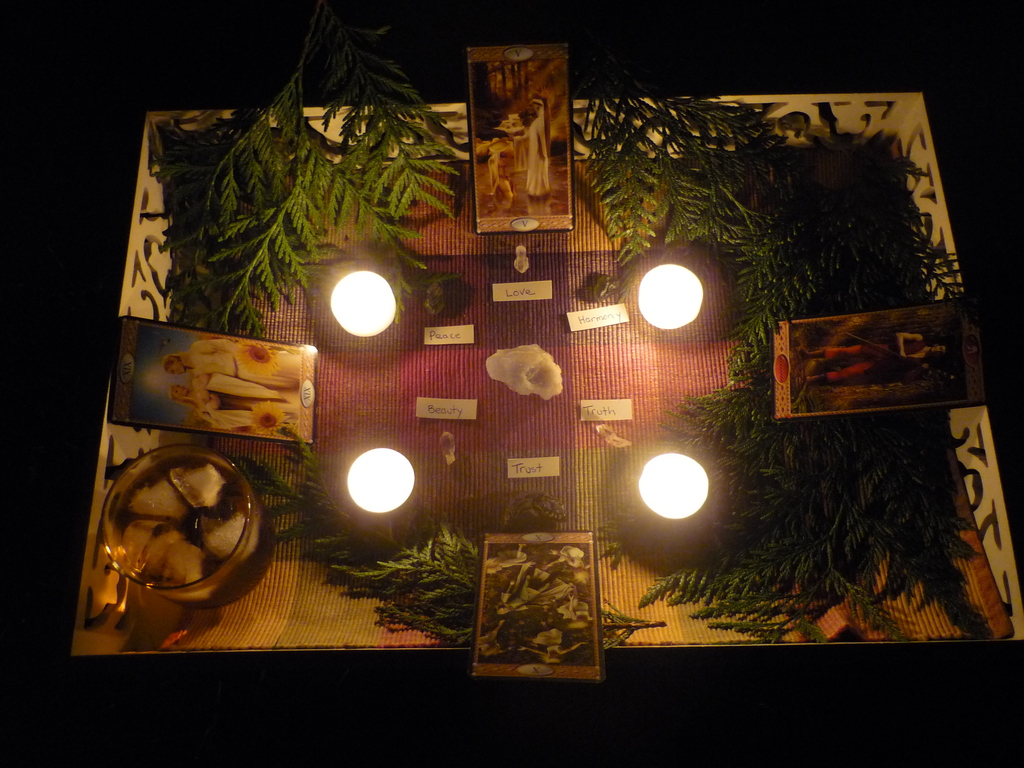 This is the pattern I am using to co-create an Elvengate for the duration of today~ the Spring Equinox.  The stones and crystals have been placed in a circle on the ground.   For more info:  http://ted-coombs.blogspot.com/

I'm continuing to work with this message.  I'm getting a deeper and deeper sense of what some of it means.  I won't claim my interpretation is "true", I think reality is far too slippery to be pinned down like that, especially when we talk about the Fey.  But, the essence I'm getting is as follows:

The Fey shut their gates 10000 years ago, hoping that the situation in the world would improve.  However, it just kept getting worse.  When they tried to open their gates, they couldn't.  Aeon, who(or which) represents the primal force, the primal divine current that defines the feel of an age.  For example, in the Age of Aquarius, the divine current emphasized structure and hierarchy, order and compartmentalization.  When the Age of Aquarius came into power, and the Fey tried to open their gates, they could not, the regard of Aeon, the flow of the Aquarius Age, prevented them from opening the gates.  Their presence, so wild and chaotic, would have disrupted the purpose of the Age.  It was extremely agonizing to be locked away from the World, especially as they are bound to the Earth.

But as the Piscean age ended, and the Aquarius age began, Aeon shifted his stance.  His favor now shifted in accord with the qualities of the new age, which is about individual fulfillment, balance, polarity, and a primal love.  This shift in stance ended their self-imposed exile, and bearing the gift of Loving-Wisdom from Aeon himself.  Loving-Wisdom is like that fire in the belly that bears a truth which speaks right to heart of the qualities of an age.  For example, the beginning of Piscean Age heralded Christianity, Islam, Confucianism has huge players.  People left the old religions and flocked to the new, because their leaders, Jesus, etc, shone with the quality of Loving-Wisdom.  But, ages pass, and now the old Religions less and less shine with Loving-Wisdom, and more and more, it is the followers of spiritualities and religions that reject dogma, encourage individual fulfillment, and honor the sacred nature of all life, that shine more and more with Loving-Wisdom.  This will continue, and the hierarchal religions will not be swept away(Remeber folks, they aren't evil, they were what was needed at the time to teach mankind to stop killing each other), but they will shrink, just like the nature based faiths shrunk in the coming of the Loving-Wisdom from the Christ Conciousness and the Peace of Islam in the prior age.

So now, as I gather,( and please, hold this lightly, test it yourself, treat it skeptically, challenge it, dispute it):

Aeon has freed the Fey.

They return to the Earth bearing the mantle of Loving-Wisdom.

As the balance between the Wild and Civilization adjusts(The new age is not about the total destruction of humanity or our technological power, it is about joining the Wild and our Civilization into one, rather than have them oppose one another), there will be chaos and the passing of much of the works of Man, yet much will stand, and much that is new and amazing will arise.   There will be very hard times, and I think we are in for some wonders and events as the return of the Fey manifests itself that will stun us, move us, break our hearts, burn us down, and build us up from a foundation of what really matters.  Do I believe the recent spat of amazing events, revolutions, natural disasters, etc, is linked to this?  I think it is, but I think it is also not that simple.

Bottom line:  Find what you love.  Serve it with all your being.  Join with others who are doing likewise.  Don't waste your anger or hatred on those who serve their fear and fight what is happening by spewing hatred, rage, and destruction.   Love them instead.  Behind their rage, is our own fear and our own sorrow for what must pass.  Therin lies our sacred tear, the key to passing through, is not to hate, not to give in to rage and anger, but rather open ourselves to the splendor and wonder that will arise from what falls.